2014 Battle on the Beach report

2014 Battle on the Beach report 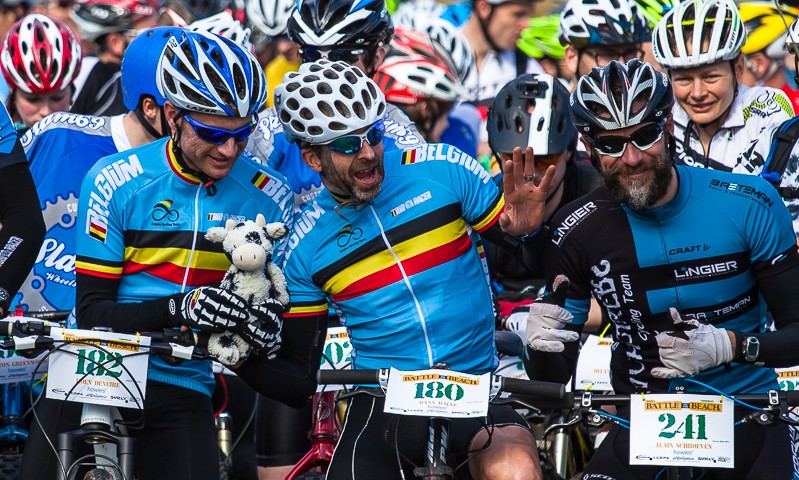 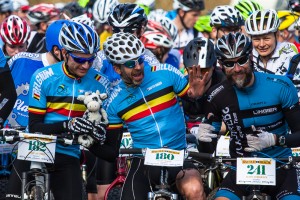 300 riders arrived at a sunny Pembrey Country Park in Carmarthenshire for the inaugural howies Battle on the Beach, the first UK beach race. The event sold out in just 3 days when entries opened in January and also doubled as the first ever Fat Bike UK Championships. Riders travelled from far and wide, including hardcore Dutch and Belgian Beach Racers as well as from all over the UK and the Isle of Mann.

The course, a 12.5km loop including a mixture of beach as well as dunes and woodland singletrack designed to be rideable by all bikes, from MTB to Cyclocross and everything inbetween. As the riders lined up on the start line, with 633 squadron playing over the speakers, no one could predict the event almost turned into a battle ground itself!

Led out on a start lap the fastest riders made their intention clear as the riders hit the beach all chaos ensued as riders struggled for a good line in the soft sand on the beach entrance. George Budd gunning for the Fat Bike title was able to cut the corner and take the shortest possible line, while most bikes went straight for the hard sand before turning right and up Cefn Sidan beach into a stiff headwind.

The wind ensured that groups and echelons formed, with tactics not too dissimilar from road racing but where else would you find an echelon that contained mountain bikes, beach racers, cyclocross bikes and fat bikes all vying for the same space? The KMC-Koga trio of Stefan Vreugdenhil, Martin Schuttert and Karen Brouwer were all in the lead group of 19 riders, which was as diverse as the course. Several Belgian riders were also present in the front group, their experience of beach racing clearly showing.

In the Open Male race, Stefan Vreugdenhil made his move during the second half of lap 1, gaining a minute advantage by the end of the lap. Despite having to battle into a head alone on the beach on lap 2 he managed to hold off a chasing group of 3 riders, Crispin Doyle, Ben Simmons and Phil Morris. He continued to hold his gap through lap 3 and while all eyes at the finish line expected a solo win from Stefan (KMC-Koga), it was incredible to see that Phil Morris (XCRacer.com) had put in a huge final lap, to pull back the 1 minute deficit and arrive into the arena neck and next with the Dutch rider. Sadly for Phil, it wasn’t to be a fairy tale win, with Stefan having the stronger sprint to take the win, the £250 cash prize and huge shell case trophy with a winning time of 1:32:54. Ben Simmons (Charge Bikes) rounded off the Open Male podium just 90 seconds behind.

Just after the lead 5 male riders hit the beach for the third time the event almost came to an immediate halt. Blue flashing lights and sirens filled the park as the Royal Navy Bomb Disposal Unit hit the beach as reports of an unexploded bomb on the beach started to emerge. With Pembrey being an old munitions factory and the event carrying a military theme the bomb scare could almost have been scripted. Thankfully, after revealing that the “bomb” was actually just an old buoy, probably washed ashore during the January storms the race was able to carry on to completion. 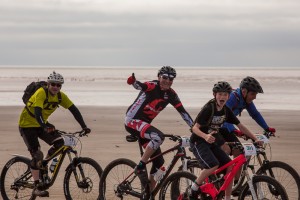 As riders weaved through the “Sandy Singletrack”, waded through the “Puddle of Doom” and across the “Somme Trenches” tales of fighting spirit, woe and hardship were starting to emerge. Ian Barrington, one of the favourites for the Fat Bike championship lost a crank arm on lap 1, but continued to ride the final 2 laps pedalling with just his right leg. While Hanneke Van Der Werf refused to let a flat tyre on the beach spoil her day. With a tyre that wouldn’t seal, a pump that wouldn’t pump she refused to DNF, eventually having help from another rider and continued the race to finish.The “Puddle of Doom” also played host to a duck hunt, with 25 yellow ducks swimming on the surface, each one linked to a spot prize kindly provided by event sponsors. It seems that they disappeared quickly, with many riders disappointed not to see or collect a duck! One person lucky enough to collect one was Alain Schroeven, one of the Wacky Racers who had made the journey from Belgium to take part.

In the Open Female race Karen Brouwer (KMC-Koga) made the most of a strong first lap, staying with the front group and went on to take the win, securing a double win for the KMC-Koga team in a time of 1:43:55, with Welsh racer Mel Alexander (Contessa Scott Syncros) having a solid race to finish 2nd ahead of Claire Beaumont.

An extra prize, very kindly provided by the town of Knokke-Heist in Belgium, via the Wacky Racer Peter Lierman was awarded to the highest British Male and Female finishers. The prize, an entry to a Belgian beach race, the Nissan beach race in Knokke-Heist as well as accommodation for 2 for the weekend. The lucky winners, Phil Morris and Melanie Alexander. 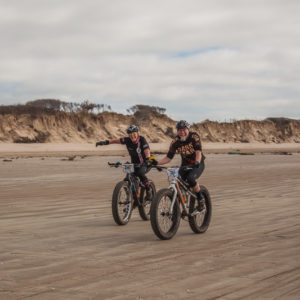 In the Veteran Female category Sharon Dolman (Cotswold Veldrijden) was the victor, ahead of local rider Lee-Michelle Jones (TRCC) in 2nd and Jo Hawkins (K&J IOM) in third. Hanneke Van Der Werf ended up finishing 4th, no doubt wondering what could havebeen.

The Grand Veteran category was closely fought, but eventually won by another local rider, Martin Hughes-Dowdle (Gower Riders) from Swansea, perhaps benefiting from his local knowledge. Less than 1 minute behind was Sam Willamson (Hemel Hempstead Cycling Club) with Donald Grey (Cardiff JIF/Cyclopaedia) just over 2 minutes behind him in 3rd.

In the Surly sponsored Fat Bike UK Championship event George Budd (Salsa) became the inaugural winner with Dan Treby (Brotherton Cycles) in 2nd, perhaps suffering from not having a group to ride with on the beach in 2nd and Julian Rider (Swinnerton Cycles) completing the podium.

In the Female race, Fiona Walker (What Mountain Bike Magazine) was a convincing champion ahead of Jane Underwood (EDS bikes) in 2nd and the undisputed queen of fat biking Judy McNeil (beerbabe.co.uk) in 3rd.

The 2015 Battle on the Beach will be at Pembrey on March 22nd (a date when the tides suit). The next event at Pembrey will be the howies Tide to Tide, a 2 or 4 person 6-hour relay event run from High tide (3pm) to Low tide (9pm).

“I went for an early attack in this race and especially both times I had to fight the headwind on the beach on my own were hard. But in the end it is great when all the suffering is rewarded with the win in this first UK beach race”

Karen Brouwer:
“I had a good start and managed to get in the front group on the Beach. The part after the beach I really enjoyed especially the technical trails back although I almost went head first in the ‘Puddle of Doom”

George Budd:
“What a totally unique event both in terms of atmosphere and the course! A real mixture of bikes and riders but all there to have a great time – like a wonderful mash up of the best bits of SSUK and Brighton Big Dog. I’ll definitely be back in 2015”

Peter Lierman (Wacky Racers):
“We loved it! We will be back next year. The Battle on the Beach just got a red dod on our 2015 calender. We will convince other beach racers mainly coming from Belgium and the Netherlands to join us!”